I have been trying lately to create my own YouTube videos and develop The Chamber’s (and mine) YouTube channel to a greater degree to attract an audience. Over the last few nights, I have made a few videos utilizing my iPhone and a photographer’s tripod. This combination makes excellent videos. However, I do have a problem uploading them to YouTube, but I am hoping to work that out soon.

Today, I thought I would make a video on how to submit a story or poem to The Chamber. I pondering this on my return to Gillett from Dumas today, where I had picked up a few groceries, medicine, etc. early this afternoon. When I started to pass the turn-off to Rohwer, it occurred to me that there is no place better suited to discuss a magazine of dark literature than at a location where a dark chapter of American History took place: Rohwer War Relocation Center National Historic Landmark.

Update November 8, 2022: I am finally returning to this post after having let it slip my mind for about two months. I did go down to Rohwer and set up my iPhone on a tripod and attempted to record a video on submitting stories to The Chamber. Setting up the camera (because of my background in photography) was simple but getting my voice to be fluent and near flawless proved difficult. I stumbled over words like I do in my daily speech, but any miniscule mistake or flaw shows up like a flare in the final cut. This is why I rarely do videos of myself–even though people who have heard me interview on the radio tell me that I have a voice for radio. I still don’t like the sound of it personally. Hearing my own recorded voice makes me feel awkward.

Rohwer War Relocation Center is an interesting place to visit. Now it is a little speck of park in the center of what seems to be nearly endless cotton fields. It is hard to imagine living in this camp and working in the cotton fields during hot summer days and then returning to the spartan conditions at the camp at the end of the day. You should drop by if you are ever in the area, which is kind of remote and off a back road northeast of McGehee, Arkansas. There are some monuments to the Japanese-Americans who served the US during WWII, a small cemetery, and several wayside exhibits describing life at the camp. A couple of miles farther south is the old train stop/ end of the line, where the prisoners got off the train. It is well preserved and has a couple of wayside exhibits. In McGehee, there is a whole museum to the camp, but my lousy timing hasn’t allowed me to get to it when it’s open yet.

I will probably go back for a third visit and take some serious photos to put in the Wikipedia article or maybe try another shot at a video for the YouTube page. 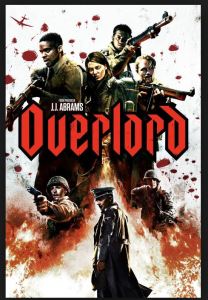 If you are a stickler for historical accuracy, Overlord is probably not for you.  The most glaring error I saw was Whites and African-Americans serving in the same paratrooper unit.  During the Second Word War, combat units were segregated.  Black personnel had their own units, although some African-Americans did serve in white units in a support capacity such as cooks or transportation drivers, etc.  Combat units did not become integrated until 1948, three years after the war ended.  The paratrooper unit in the movie should have been either solidly white or solidly black (there was one black paratrooper unit, the 555th Regiment, though it did not seen action overseas). There were probably lots of smaller errors, though none were blatantly obvious to me, and I am probably more well-versed in the units and tactics of the Second World War than most people, because I have a longstanding interest in military history, particularly that of World War II.

The story is about the survivors of a squad of paratroopers on D-Day, who are supposed to parachute behind German lines and blow up a communications tower.  However, they find the tower, which is concealed in a church, is on top of a covert facility in which the Nazis are using the local French populace as guinea pigs in experiments to develop a soldier that will live for a thousand years.  The serum to transform the soldiers is not yet ready and, although it can raise the dead (turning them into hideous monsters), it has not yet been tested on the living.  Of course, you know that some of the living will be injected with the serum.

As far as the story goes (outside the noted anachronism), I thought it was well-written with regards to explaining how certain aspects of the plot tie together.  For example, in one scene American soldiers are hiding in an attic while German soldiers are on the floor below.  One of the Americans knocks something over and the Germans start up the steps to investigate.  A young French boy who is with them, and who is the brother of the woman the Germans are questioning, downstairs happens to be in the attic with the Americans.  As the Germans come up the stairs, he appears at the top with a baseball glove and ball, which he drops down the stairs.  The Germans think the noise was caused by the boy, laugh, turn around, and head  back downstairs.  The reason the boy has the baseball glove and ball is explained in an earlier scene, when it is noted that he has a longstanding interest in baseball, which is not normally a sport that interests the French.

The film is fast-paced and the suspense and action are constant.  This film straddles the genre boundary between horror and action and does it very well.  For a horror movie or action movie, the characters are well-developed.  I actually felt some empathy for the main ones in their various plights.  When someone dies, there is actually a reason.  This is not the norm for most horror or action films where the characters are there just to build the horror by increasing the body count.  The ending is not disappointing and it ties up one plot point nicely.

This movie is well worth getting at Red Box, which is where I got my copy, and would be worth the price of full admission at a theater.  It might even be worth adding to your DVD collection.

I recommend this film to horror fans, though action-adventure fans may find it too gory.