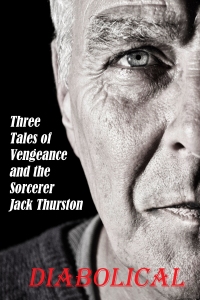 Today, Diabolical is free to commemorate the birth of John Dee, Scientist and Practitioner of the Black Arts, on this date in 1527.

“John Dee was an English/Welsh mathematician, astronomer, astrologer, occult philosopher, and adviser to Queen Elizabeth I. He devoted much of his life to the study of alchemy, divination, and Hermetic philosophy.”  –Wikipedia

Go to Esoteric Archives to see a list of his selected works.

Go to amazon.com/author/philslattery or Goodreads or any other social media to leave a review.

Jack Thurston is a retired professor of medieval literature and history. He is also a widower and father and a retired sorcerer who has returned to the black arts to exact revenge for the death of his wife, daughter, and brother. He has an intriguing position in the universe at a focal point of life, the afterlife, logic and reason, anger and hatred, the ancient and the modern worlds, grief and his attempts to escape grief through self-destruction. Though he wants to have the peace he once found with his wife, Agatha, he is pulled in many directions by circumstance and by his powerful negative emotions.

I am a fan of the old school horror practiced by such authors as H.P. Lovecraft, Poe, Edward Lucas White, and Arthur Machen.  I endeavor to make a story as terrifying and suspenseful for the reader as possible without resorting to gratuitous blood and gore for a simple shock or quick feeling of disgust.

This collection of three short tales is perfect for those who have only a few short breaks to escape into the hidden world of horror, black magic, sorcery, and anger-fueled revenge.

You can find this and other works at my Amazon author’s page:  www.amazon.com/author/philslattery.

Currently, Jack has a Twitter account (@jthurston666), where he has attracted a small following and where it has only recently been revealed that he is fictional. Jack has his own blog at jackthurstonblog.wordpress.com (a work in progress) and his own e-mail at jackthurston666@gmail.com.

Show your appreciation for these stories by leaving a review on Amazon, Goodreads, or other social media.

If you enjoy horror, check out my collection of horror short stories A Tale of Hell and Other Works of Horror: Stories of wizards, werewolves, serial killers, alien worlds, and the damned, which includes these stories.